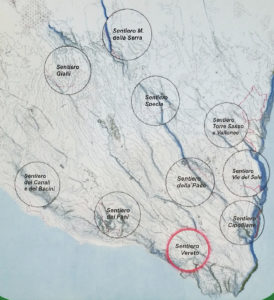 LA VIA SALLENTINA: Built on an original a Messapian road mentioned by Pliny, the Elder, this ancient Roman road is an extension of the via Appia, and serves as a junction between Taranto and the main centres of Salento, and in our area, connects Barbarano (Piccola Leuca), Veretum (the Chapel of the Madonna di Vereto and Le Centopietre) and Santa Maria di Leuca (the Sanctuary of Finibus Terrae dedicated to the ‘Assumption of the Virgin Mary into Heaven’).

SENTIERO DI VERETO (THE VERETO TRAIL): Vereto, is a Messapian centre, associated with the legendary Hyria, which according to Greek historian Herodotus, was the mother-city of Iapygia. It rose on a hill standing  140 meters above sea level, along the via Sallentina. Its strategic position allowed its inhabitants to survey both the plain lying below, it which stretched from Torre Vado to Santa Maria di Leuca , and a large area that is located between today’s urban centres of Montesardo and Castrignano del Capo. The principal landing place was Torre S. Gregorio, a picturesque bay sheltered from the winds of the northern, oriental and southern quadrants that abounded in fresh water sources.

SENTIERO DEL CIOLO (THE CIOLO TRAIL): The Bay of Ciolo can be accessed on foot, along a 4km trail that leads from the centre of Gagliano, to the left side of the Parish of San Rocco.

You will walk along a strip of land lying at the foot of two imposing rocky crags that form a central gully, created over thousands of years, from the erosion of torrential rain. The breathtaking scenery resembles a painting, and features clear-cut details and vivid colours, with the deep- blue sea silhouetted in the background.

SENTIERO LE CIPOLLIANE (LE CIPOLLIANE TRAIL): A 2.5km rural trail (approximately an hour’s hike) that leads from Ciolo to the car park of Porto Vecchio di Novaglie. In bygone days, the trail was used to carry salt and other goods – loaded onto the backs of donkeys – from the coast inland.

LA VIA DEL SALE (THE SALT ROAD): The name of these roads in Corsano originate from their function as a guide for the workers who collected salt from special tanks dug out in the cliff.

The oldest is the ‘N’zepe-Bortoli’ from which secondary roads, built in the 18th century, and named Munterùne, Scalaprèula and Scalamùnte, branch off. Our walk starts from one of these paths located in the town of Scalamàsciu in Marina di Guardiola. The hike lasts for about three hours and ends in N’zepe-Bortoli, in Corsano.

SALENTO TREKKING ASSOCIATION: The ’Associazione Speleo-Trekking-Salento’ was established in 1997 to introduce tourists to the natural and cultural treasures of Salento, and to educate them about sustainable development and the protection of the environment. LINK